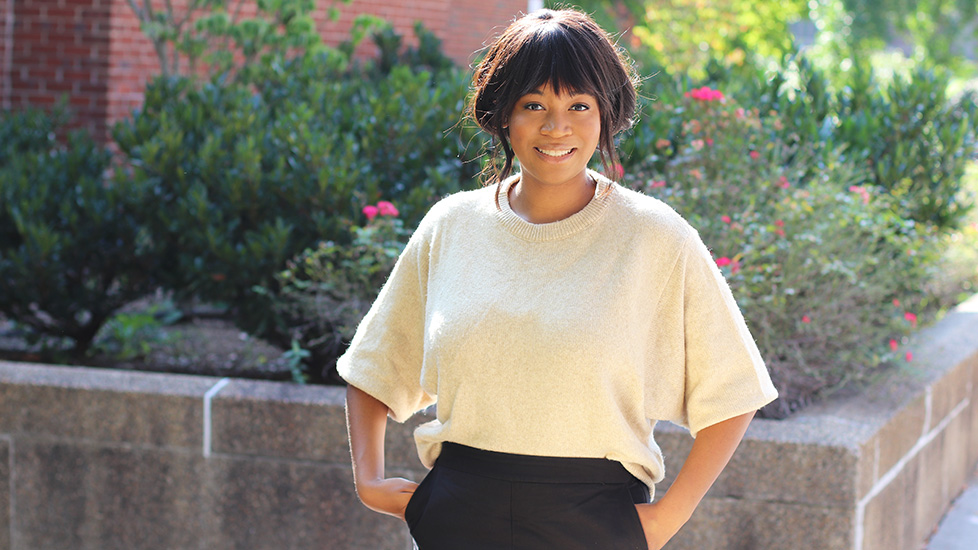 Woodi Woodland enjoyed extensive travels across the UT campus in her role as a student ambassador, but it was her studies that took this chemical engineering alumna across the globe. She completed her degree after returning to campus from a 15-month internship and study at Germany’s Technical University of Hamburg.

“It was amazing,” Woodland said. “All of my classes were taught in German, which was my biggest motivation to stay. I had always wanted to perfect my German, but did not think I would have the chance.”

She previously visited Germany as a high school student from her home in Brentwood, Tennessee, and looked for opportunities to return. In 2017 she discovered the Research Internships in Science and Engineering (RISE) website.

“I had heard of their parent organization, DAAD, before because of a study abroad exchange I considered in high school,” she said. “So, I was very ecstatic to find a reputable and known organization conducting research in my field that I could intern with.”

With an eye toward a medical career, Woodland chose chemical engineering as an undergrad major to satisfy her personal requirements for academic rigor.

“I wanted to pursue medicine, but wanted to have a back-up plan,” she said. “I debated studying math, but realized I would miss the science, and thought about majoring in a science field—neuroscience, chemistry, etc.—but knew I would miss math.”

An advisor encouraged her to pursue chemical engineering after she explained her long-term career goals, which she started forming as a teen.

“In high school I researched in a biomedical engineering lab at a university in Nashville,” said Woodland. “I was researching the quantification of biochemical changes in cervical tissue during pregnancy in order to possibly detect signs of a pre-term delivery.”

To diversify her undergrad experience early on, she spent time in non-academic settings outside of her studies—such as working in a juice bar the summer before her sophomore year. Then the RISE program offered her the chance to shift focus to her chosen field in a big way.

“I had never worked in a chemical engineering lab before and wanted to get experience,” said Woodland. In addition to being able to use her second language while learning, she also enjoyed getting acquainted with the German education system.

“Adjusting to a system where there is only the final and lecture only one time a week for 90 minutes was a lot to get used to at first, but it also allowed for me to have a lot of time to do things outside of the classroom,” she said.

Woodland enjoyed spending the holiday season in Germany and visiting their holiday markets. She also came to appreciate the German work ethic.

“Many of the people I knew had a calmness about them when it came to work and did not let their work stress them out or let them over work themselves,” she explained.

Part of Woodland’s own strong work ethic is staying on the lookout for specific research opportunities in her medical-school future.

“I would like to research the effects of addiction on the brain and its repercussions,” she said. “I want to go deeper than just the psychological and physiological effects we see and experience. I want to help investigate further the changes it has neurologically.”

This focus and drive carried Woodland around the world and back and has laid the foundation for her continued impact as a standout Engineering Vol.