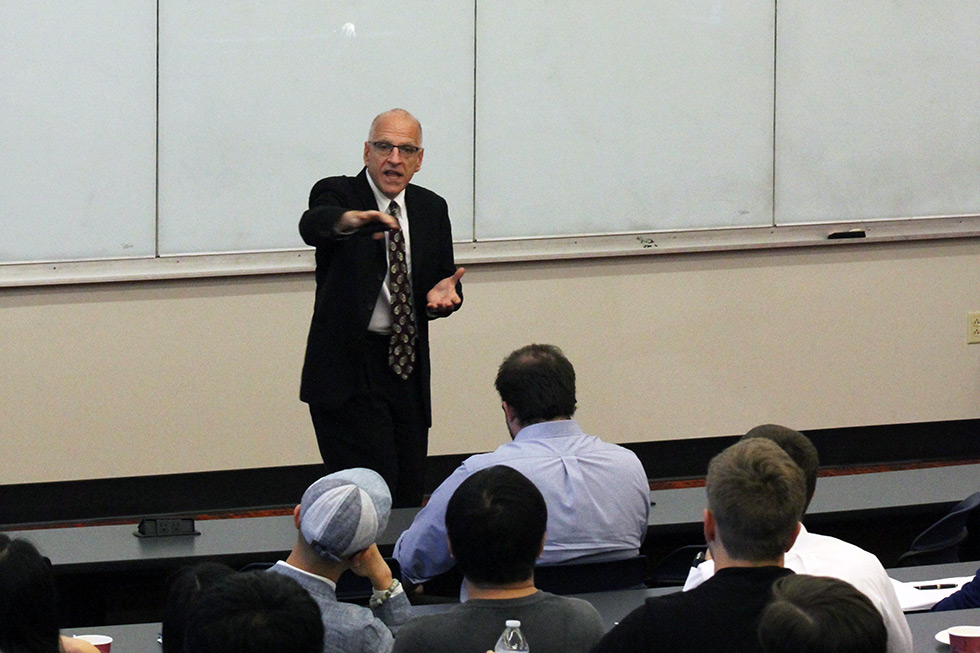 Future strategies for energy production will require processes and materials that can efficiently convert sustainable resources into fuels and chemicals. That’s according to Matthew Neurock, who spoke at the department’s 2017 Troy C. Trotter Distinguished Lecture to a captive audience of students, faculty, and staff members this September.

In his lecture, titled “Engineering Molecular Transformations over Supported Catalysts for Sustainable Energy Conversion,” Neurock presented information on recent advances in computational catalysis and the ways these can be applied to engineering molecular transformations for energy conversion and chemical synthesis. He addressed the sites and nanoscale reaction environments necessary to carry out specific bond-making and breaking reactions, plus processes important to the control of the catalytic conversion of biomass to chemicals and the electrocatalytic transformations of fuels to energy.

Neurock is the Shell Professor of Chemical Engineering and Materials Science at the University of Minnesota (UM). He received his doctorate from the University of Delaware in 1992, worked as a postdoctoral fellow at the Eindhoven University of Technology in the Netherlands from 1992 to 1993, and as a visiting scientist in the Corporate Catalysis Center at DuPont from 1993 to 1994. He joined the chemical engineering faculty at the University of Virginia in 1995 before joining UM in 2014.

Neurock has made seminal advances to the development and application of computational methods toward understanding catalytic and electrocatalytic reaction mechanisms and the sites and environments that carry out reactions under working conditions. He has received various awards for his research in computational catalysis and molecular reaction engineering and co-authored over 250 papers, two patents, and two books. He served as an editor for the Journal of Catalysis for 10 years and continues to serve on numerous other editorial and advisory boards.

The lecture series was established by the Trotter family to honor alumnus Troy C. Trotter (BS, ’47). The lecture provides CBE with the opportunity to invite nationally recognized experts to UT for the benefit of students, faculty, and the local professional community.