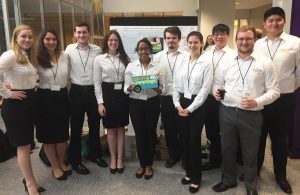 AIChE’s Chem-E-Car Competition engages college students in designing and constructing a car powered by a chemical energy source, that will safely carry a specified load over a given distance and stop. The team’s car, the Myst-Air-y Machine, is powered by a PEM hydrogen fuel cell, which uses hydrogen from a rubber balloon and reacts with oxygen from the air to produce the electricity.

Also, Kelsey Grady and Lacey Roberts competed in the Poster Competition. Kelsey Grady placed third in the competition. Her research is “Effect of Membrane Pretreatment on the Mass Transport of Vanadium Redox Flow Batteries.” Kelsey is in Thomas Zawodzinski’s research group. Zawodzinski is the UT-ORNL Governor’s Chair for Electrical Energy Storage and Conversion.