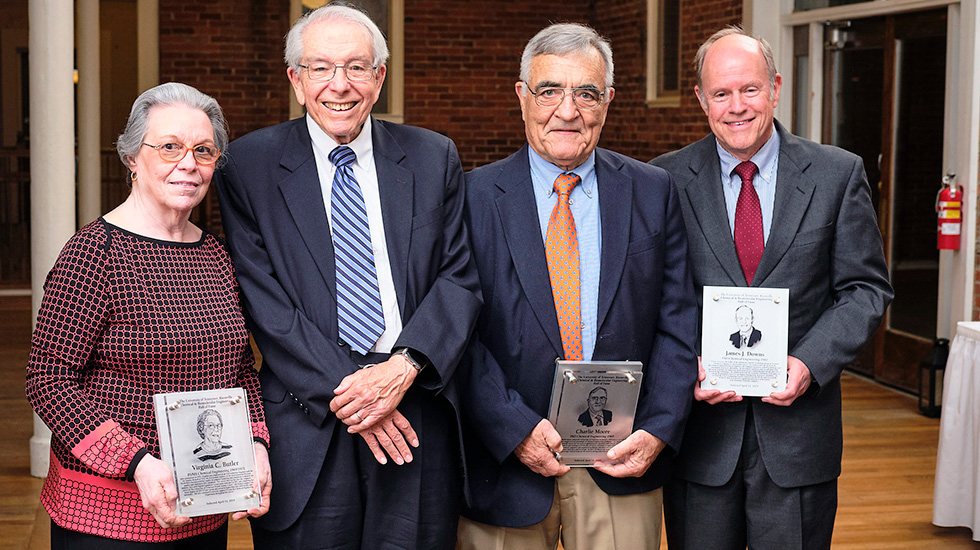 This spring, three new inductees joined the Chemical and Biomolecular Engineering Hall of Fame. These new members share a focus on process control as well as something else—rather, someone else—special. Inductee Charlie Moore influenced the career paths of the other two inductees, James Downs and Virginia (Jenny) Butler.

For 50 years, Professor Emeritus Moore served the department through teaching and research as well as serving as department head from 1993 through 1999. Moore originally chose to build his career at UT because the university promised him a research lab and allowed him to work with industry.

The landscape influenced his decision, too—“UT was the only engineering school that could offer me East Tennessee,” he said.

Bridging academia and industry was a driving theme throughout Moore’s work. His research focused on aspects of modeling and industrial process control. He not only taught students about these topics, but also provided more than 200 seminars and short courses to practicing engineers in the United States and Europe.

In collaboration with Eastman Chemical, Moore developed the Process Control Internship to give his students a meaningful introduction to the world of industry.

It provided the students and me an experience much more interesting than the toy problems found in textbooks. The problems were real, and in most cases the work done by the class was used by Eastman.

Downs, manager of the Advanced Controls Technology Group at Eastman, benefitted from Moore’s industry knowledge while working on his PhD in chemical engineering at UT.

“New process control technology was introduced through relationships that Professor Moore had,” he said. “The understanding and relationships developed during my time there were invaluable in my development as a practicing engineer.”

In his role at Eastman, Downs works closely with a team of engineers to design and implement process control systems. “I enjoy bringing the ‘how will we operate/control this process’ perspective to teams whose focus may be ‘how can we design a process for least cost?’ I also spend a significant amount of time teaching about process control,” he said.

He considers his most important contribution at Eastman to be “guiding new engineers in how they can use their technical skills to edify their work environment and to improve the lives of others.”

Eastman is not the only place Downs helps new engineers grow. He regularly serves on PhD committees at multiple universities and he has taught classes at UT as an adjunct professor for 11 years. He also supports the department as a member of the industrial advisory board that provides input during the ABET accreditation process.

Like Downs, Butler was attracted early on to process control and mathematical modeling. She completed her bachelor’s and master’s in chemical engineering at UT in the late 1960s and early 1970s—a pivotal point in the evolution of computers. “I was hooked from the beginning,” she shared.

Her first job, environmental engineering at TVA, used first-generation minicomputers for atmospheric modeling. From there, Butler moved fully into the computer industry. In her role with Digital Equipment Corporation, she provided software support to customers including NASA and their contractors. For the rest of her career, she managed servers and clusters for the UT Health Science Center, providing holistic support from installation to hardware problem resolution.

“I’m thankful for the many opportunities that came my way,” Butler said, attributing them in large part to the coursework she took at UT and to professors like Moore with industry experience and relationships. “I cannot count the number of times that something specific that I learned was exactly what I needed to know to do my job well,” she said.

Since her retirement in 2016, she has stayed involved with UT through outreach activities such as participating in a Memphis-area panel encouraging high school seniors who have already been accepted to the Tickle College of Engineering.