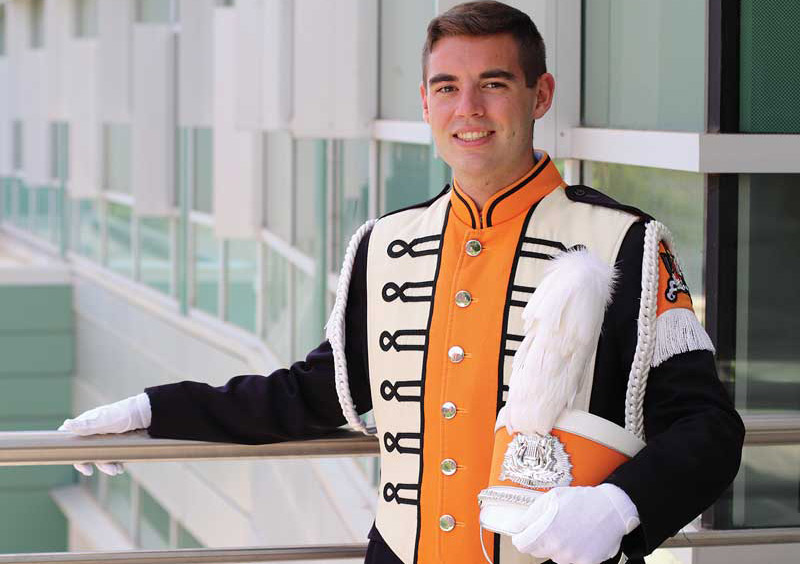 Dylan Chitwood grew up in the quiet rural town of Winfield in Scott County, Tennessee. Anyone looking for him there might have followed the sound of his clarinet, an instrument he picked up in fifth grade. He still plays, but dual enrollment courses in high school sparked his interest in chemical engineering.

“It seemed like the best way to combine my interests of math, chemistry, and biology,” he explained.

The musical/chemical combo ignited impressive time-management skills as well. The Chancellor’s Honors senior now maintains a rhythm of duties as a member of Ferguson Faculty Fellow in Chemical Engineering Cong Trinh’s ViPaRe research group, as an Engineering Student Ambassador, and as assistant drum major for UT’s Pride of the Southland Band.

As the ADM, I am responsible for knowing everything that head drum major Rebecca Percy does from week to week. We play between nearly every single play and coordinating that takes two people. I am also responsible for leading the White Pep Band in the Vol Walk before every game as well as directing the Volleyball Pep Band.”

Chitwood also fills a role during band rehearsals as a “Blacksuit,” responsible for teaching the marching drill and other Pride traditions to incoming freshmen.

“I am very excited for the opportunity to act as a teacher,” he said. This Volunteer spirit echoes in his academic and research priorities. For his biomolecular engineering thesis, Chitwood examined recently discovered anti-CRISPR proteins as a potential mechanism for the delivery of antimicrobial drugs.

“I really want to make an impact in the medical community by developing pharmaceuticals,” he said. His thesis investigation is akin to the medicine-delivery research of Trinh’s group project.

“The ViPaRe project is a big undertaking,” he said. “I never thought I would have the chance to work on a project funded by DARPA, especially as an undergrad.”

Chitwood looks to advance these efforts as he weighs potential futures in academia or industry, and he intends to provide his own soundtrack along the way.

“I hope to continue playing in ensembles at my graduate institution or in a local community band,” Chitwood said. “Music has brought me many great experiences, opportunities, and friends over the last eleven years and I couldn’t imagine just giving it up.”