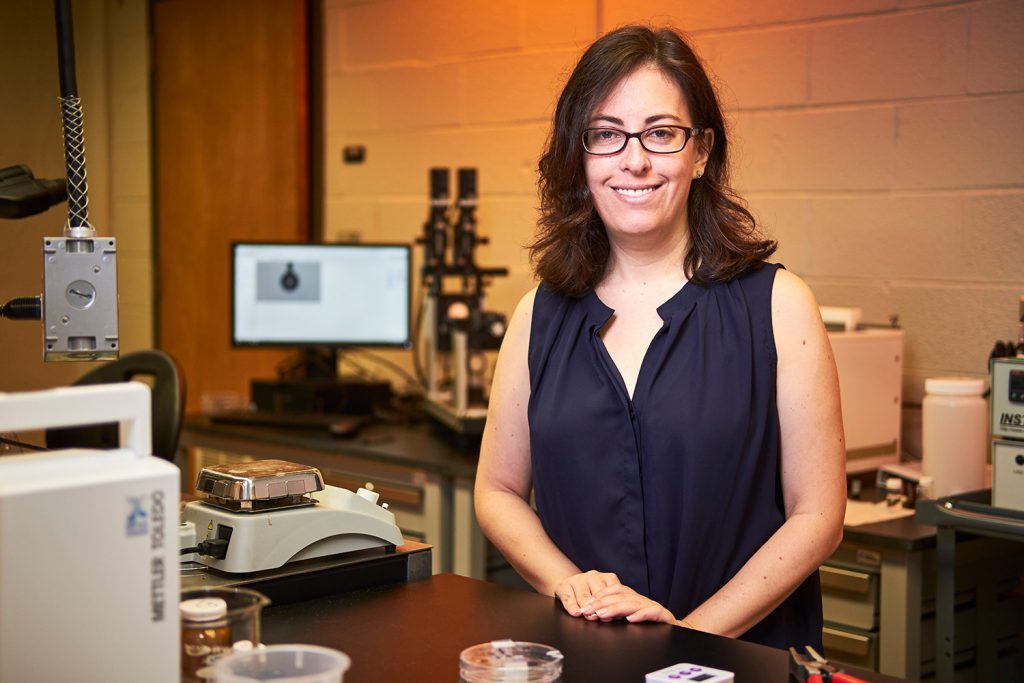 Lithography has been around since the 16th century, making it one of humanity’s oldest techniques for duplication. The basic idea of being able to quickly ‘imprint’ images on a target remains the same. But researchers like Gila Stein, the Prados Associate Professor of Chemical and Biomolecular Engineering, have helped take it to a modern level.

Originally, images were transferred by pressing a plate prepared with a variety of substances into a ‘target’ plate coated with fats. The prepared plate would then etch the image into the transfer plate, allowing mass production of images or text.

Now, light is projected through a series of optics on to thin films of photo-sensitive polymers atop a silicon wafer, producing silicon chips.

“Light triggers a chemical reaction, which is the first step towards forming patterns,” said Stein. “Our goal is to understand how the properties of thin polymer films control the progression of these chemical reactions so we can predict how new materials will perform.”

It’s all part of a broader field of research into the understanding and design of functional polymer films for electronics, energy, membranes, and coatings.

Stein’s research group also works with materials called block copolymers that can form patterns and arrays on their own at the nano-level. Gaining an understanding of how these systems self-organize in thin films—two-dimensional layers of polymers—holds endless possibilities. The films can complement lithography in the manufacture of next-generation electronics and can be adapted for controlled use in electronics and sensors.

“Polymer systems have the potential to impact a number of different fields,” Stein said, “but they are also pretty complex. We use techniques like X-ray scattering, infrared spectroscopy, and microscopy to examine structure across multiple length scales, from individual molecules to millimeters.”

Stein noted that faculty and researchers within the department and at ORNL can help build off one another to improve such research.

“We work with faculty in the department to model chemical reactions in thin films, and to study self-assembling polymers that could be used in batteries,” said Stein. “We also collaborate with research groups at Rice University and Oak Ridge to study the surface properties of branched polymers, which are useful in the design of responsive surfaces.”

Just another way that Stein and her research group are proving that small things can make a big difference.