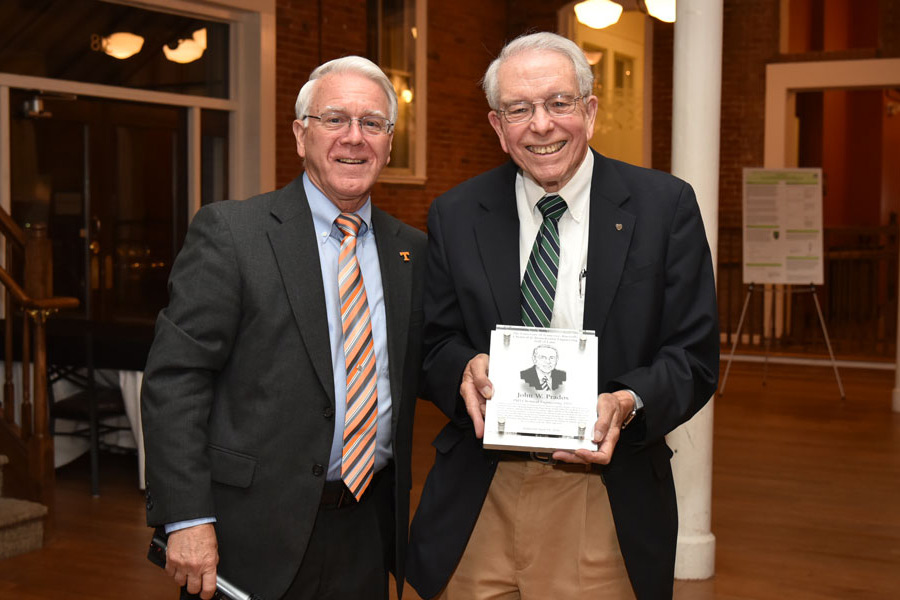 Now, it has a hall of fame to help honor and share that legacy.

John Prados, a UT vice president and University Professor emeritus, has been named the inaugural member of the hall for his sixty years of service to the department as a teacher, administrator, and university icon.

“It is hard to find words to express my appreciation for this honor,” said Prados. “Words like ‘overwhelmed’ and ‘speechless’ come to mind.

“I want to express my deep gratitude to the department for this recognition, because what I have accomplished over the past sixty years could not have happened without the help and support of my faculty colleagues, the departmental staff, and especially my students, and they all share in this honor.”

One of the oldest chemical engineering programs in the South, it became its own department in 1936, one year after starting its master’s degree program. A doctoral path was created in 1949, the first such PhD offered by any institution in Tennessee, public or private.

“The faculty in the department wanted him to be the first and only person elected to our hall of fame in its inaugural year,” said department head Bamin Khomami. “It’s an acknowledgement of his standing in the field as well as his outstanding contributions to our program over many decades.”

Prados said he’d planned to go into the petrochemical or petroleum industry on the Gulf Coast after finishing a two-year stint in the Air Force. But fate intervened.

A faculty member suddenly left the department for an industry job, and then–department head Robert Boarts offered Prados the job.

“My career at UT was totally unplanned,” said Prados. “I had enjoyed some part-time teaching while in graduate school, and although the pay was only about two-thirds of my industry offers, there were good possibilities for research support and consulting at Oak Ridge National Laboratory, so I took the job.

“Except for two periods of leave—one to work at ORNL and one with the National Science Foundation—I have been here ever since.”

To be considered for the Department of Chemical and Biomolecular Engineering Hall of Fame, a person needs to hold a degree from the department or a department at another college with a sustained relationship with UT, have a minimum of ten years of experience in engineering, have been recognized by peers or by honorary societies, and not be an active faculty member at UT.