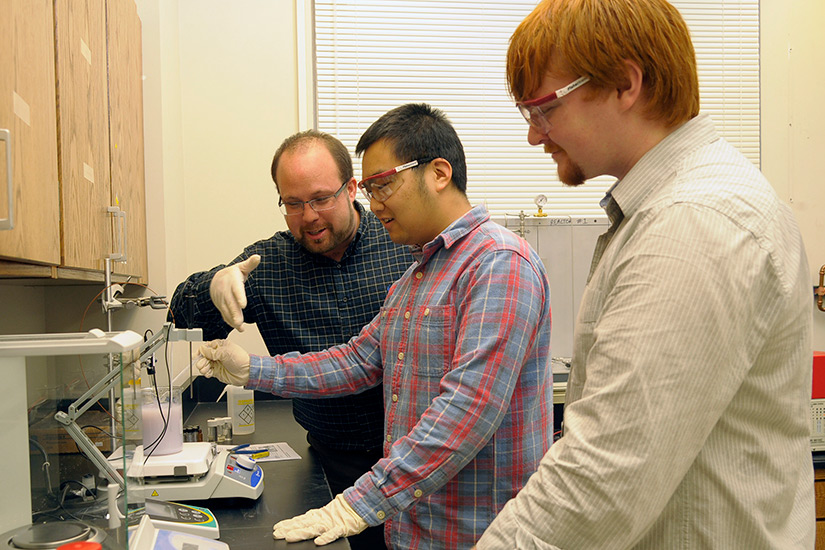 For Siris Laursen, a CBE assistant professor, the rewards of being a university teacher and scientific researcher are “immeasurable.”

“My job is one of the only jobs in the world where one may elevate people to become great engineers and scientists through education and make a world-wide impact through cutting-edge research,” Laursen said.

Laursen was fascinated by how the world works from a very young age, and wanted to understand how nature in general operated at the fundamental level. He was interested in the workings of everyday household appliances such as radios, heaters, and fans, and often spent time disassembling them to understand the complexity of their electrical and mechanical functions. He also worked with chemistry sets as a child, which revealed the amazing world of materials manipulation at the molecular level.

“Early childhood experiences combined with a scientifically-minded family made my decision to become an engineer an easy one to make,” Laursen commented.

Laursen was interested in the University of Tennessee for a variety of reasons.

“The growing and improving CBE department at UT attracted my attention when I was searching for a faculty position,” Laursen said.

The vibrant nature of the faculty and their ever-improving research portfolio indicated that this was a place to perform cutting edge research. This was further supported by the fact that UT was in such close proximity to Oak Ridge National Laboratory. The combination of quality resources and faculty at ORNL and UT made me decide to join the CBE department.”

Laursen’s research group aims to develop the molecular level fundamental understanding needed so that new and improved catalytic materials can be developed for existing and new sustainable fuels and chemicals production processes. Catalysts are materials that accelerate and control chemical reactions. These materials function as the engines for the world’s chemical industries. In the effort to realize the production of truly sustainable fuels and chemicals, Laursen’s group works to rationally design catalytic materials that transform CO2 and water into convenient fuels and chemical building blocks such as methanol, ethanol, CO2, H2, and ethylene and propylene. Advancements in this project indicate that renewable fuels produced from CO2 and solar energy is possible in the near future. Catalytic production of biofuels from non-food organic waste is also a major aim of the research group. The project’s goal is to transform a wide array of biomass waste–woody trees, bushes, and municipal plastic and organic waste–into fuels for automobiles and chemical building blocks for the production of consumer plastics, rubber, and foams.

Laursen is excited about the potential of this research.

“To date, our most interesting scientific discovery would be the production of higher hydrocarbons from just CO2, water, and sunlight,” he commented. “Imagine an energy system that would transform sunlight and CO2 captured from the atmosphere into gaseous or liquid fuels you could use to heat your house or power your automobile and electronics. The process would drastically reduce net CO2 emissions and present a closed carbon cycle that would not detrimentally impact our environment. The catalysts we are currently developing for CO2 reduction exhibit the highest reaction rates reported worldwide. These advancements indicate that renewable fuels produced using solar energy are just around the corner.”

The overarching goal of the Laursen group’s research is to reduce the unfavorable footprint of the chemicals and fuels industries to promote a sustainable and pollution-free future for our society. Photocatalytic CO2 reduction and biomass-to-fuels projects aim to open new avenues for fuels production. These advancements will allow valuable petroleum resources to be used for applications for which they are most suited–as chemical building blocks. Solving contemporary problems associated with catalysts for petroleum upgrading in existing processes is also a major aim. Improvements in existing processes will aid in comfortably transitioning between chemical economies that rely upon petroleum to those that utilize renewable material feedstocks. Taking into account both today and tomorrow’s fuel and chemical production and use needs, the Laursen group aims to help realize truly sustainable chemical technologies.

“Two of our more advanced undergraduate researchers, Greg Tate and Nick Barth, have developed cutting edge transition metal sulfide, phosphide, and selenide synthesis procedures that have formed the basis for much of our work in fuel cell and CO2 photoreduction catalysis,” Laursen said. “One undergraduate research assistant alumni indicated that he learned more in just three months in our laboratory than he learned in his three years at UT. Either through their performance or the accolades concerning the experience gained, the role of undergraduate research in furthering science and education is abundantly clear.”