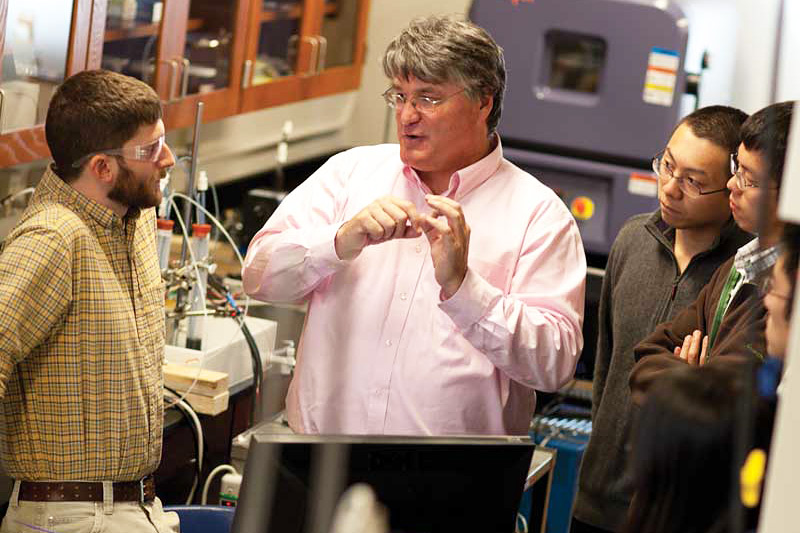 One of the biggest drawbacks of the industrial age is the pollution produced by the machines that power society. What, then, might it mean to be able to operate everything from vehicles to houses by a device whose only output beyond the energy it makes is water and heat?

Fuel cells hold such promise. The growth and development of fuel cell technology is one of the big waves in science right now, with UT positioned as a leader of the armada of institutions pushing its boundaries.

Led by UT-ORNL Governors Chair for Electrical Energy Conversion and Storage Thomas Zawodzinski, the Zawodzinski Group in CBE has made several advancements in fuel cell design, particularly in polymer electrolytes, electrodes, and catalysts.

Much like a battery, fuel cells have an anode and a cathode and a membrane that both separates and facilitates the reaction between the two, producing power. Where they differ from a battery is that, as their name implies, they use fuel and air to complete the reaction, and in fuel cells the anode is negative and the cathode positive.

Any improvement in a few key components could have groundbreaking effects on the technology’s adaptation as a whole.

“Currently, about one-fourth of the power generated is lost during the reaction,” Zawodzinski said. “The materials and techniques we are working on should help us eliminate that to a large degree, which will make the cells more efficient and cost-effective.”

Hydrogen is pumped into the anode side, while oxygen from air is introduced into the cathode side. Their reaction produces electricity, water, and heat, making them ideal in a number of ways.

Cars, for instance, could be powered in such a way that the only exhaust was water. Houses could use them to provide all three necessities, something of particular interest given recent recovery efforts following hurricanes. In such cases, having fuel cells at the ready could provide help, especially power and water, weeks or even months before such services might otherwise be restored.

“In many ways, fuel cells are like engines, only you aren’t burning anything to make the process work, so it’s much smoother, much more efficient, and has no harmful exhaust,” Zawodzinski said. “The technology for basic fuel cells has been around for years. NASA used them on the Apollo missions, for example. The key is to make that next great leap forward, technologically speaking.”

At the heart of fuel cells lies the proton exchange membrane, or PEM, which allows only positively charged ions to pass from the anode to the cathode. Electrons, separated from the fuel at the anode, take an alternate path to the cathode, which completes the circuit and produces energy.

Currently, PEM fuel cells utilize platinum to varying degrees in their design, especially at the cathode where the oxygen reacts slowly, but Zawodzinski’s group is developing a new type of cathode built with less expensive yet more efficient materials.

While the ability to provide basic needs for a house is one eventual target, the tweaks the group is making at the PEM level will have a major impact all its own. Each PEM test cell is about the size of a dime, while a real world single cell might have an area the size of a place mat.

“This is a game-changer for both us and the technology itself,” Zawodzinski said. “The idea we have could improve output anywhere from 30 to 50 percent. At that point, the idea really becomes practical in an everyday consumer sense.”

Some challenges still remain, however. While fuel cells can be filled up the same way one might currently fill a gas tank, Zawodzinski said that in the US only California has really committed itself to establishing a “corridor” of hydrogen filling stations in place for vehicles. To get other states on board might require the next big advancement in fuel cells.

Zawodzinski and his team have a message for those yet to get on board: challenge accepted.