Many college students celebrate graduation by traveling or having a grand adventure—something that will let them see world from varying perspectives.

Jessica Ossyra has been there, done that.

Ossyra, who graduated with a bachelor’s degree in chemical and biomolecular engineering on May 9, has already visited all 50 states and 30-plus countries thanks to her time as a circus performer.

“My uncle was a lawyer in Chicago for more than a decade when he decided to run away and join the circus,” Ossyra said. “I was very young when he did this, so I always had an uncle in the circus. My mom was a teacher, so during the summers off from school, we’d travel and visit him. We were able to see the country, earn a little summer money selling toys and concessions, and—best of all—learn how to perform.”

Ossyra said she traveled with the circus for three years, performing aerial stunts, riding elephants, serving as a magician’s assistant, climbing ropes, swinging from ladders, and helping to set up rigging and take down tents.

“It was an incredible experience,” she said.

Being a circus performer may not have been typical college preparation, but Ossyra said her time in the big top taught her the value of teamwork and showed her how to view the world in broad strokes—skills that helped her succeed on Rocky Top and promise to serve her well as she begins her career working as an engineer for Diageo at its Captain Morgan rum distillery in Christiansted, Saint Croix.

After leaving the circus in 2008, Ossyra earned a bachelor’s degree in animal science and biotechnology at the University of Illinois. She got married, had a child, and moved to Tennessee.

We came here because my husband started his PhD and was working at Oak Ridge National Laboratory, but now Knoxville really feels like home. Being here at school, living here in Knoxville, it gets in your blood. It’s a really special place.”

She said she chose chemical engineering because she enjoys lab work and was intrigued by the role the field plays in manufacturing.

Ossyra said she’s been impressed that the Volunteer spirit is something people take to heart.

This semester she received the Leadership Legacy Award from the Division of Student Life for her service to the campus and the Knoxville community, was named the Society of Women Engineers Pathfinder Award winner for her commitment to the professional and personal development of her peers, and was part of her department’s winning team in the inaugural Tickle College of Engineering Integrated Engineering Design Showcase, claiming honors for the most creative project as well as the People’s Choice Award.

She has helped with WomEngineers Day, a biennial conference where female students talk about how they can leverage networking opportunities and perpetuate a culture of inclusivity in academia and industry.

“WomEngineers is about introducing essential life skills to go along with what you learn in the classroom,” she said. “I tried to stress the importance of those topics to students while at the same time encouraging them to meet with the alumni and board of advisors members who took part in the panels. Students need to realize that they will have perhaps no greater allies than alumni who have come before them and want to see them succeed.” 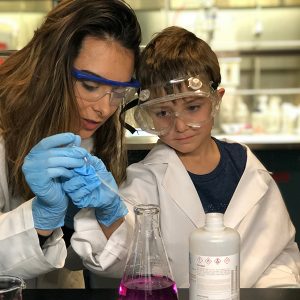 Jess Ossyra and son, John Emerson, in a CBE lab.

In the classroom, she has been a prolific worker, producing publications, giving presentations, and even sharing her research at high-profile events like Posters at the Capitol in Nashville.

She has also served as a mentor with UT’s Office of Undergraduate Research, sharing her research experiences with undergraduate students and encouraging them to seek out opportunities.

Within her department, Ossyra has become a member of the American Institute of Chemical Engineers and has served as a teaching assistant in the Eastman Unit Operations Laboratory.

The former circus aerialist admits it’s taken some juggling to make it all work.

“My son, John Emerson, has become a familiar face around here,” she said. “Everyone knows him, and people have pitched in to help watch him when I’ve had tests and things like that. In turn, it has helped him develop a love for UT and a love for the community that comes with it. He was even recognized at our annual SWE awards banquet this past weekend for his participation in events.”

“At the end of the day, it gets back to the Volunteer spirit, because I don’t know how I would have done it without volunteers helping me.”