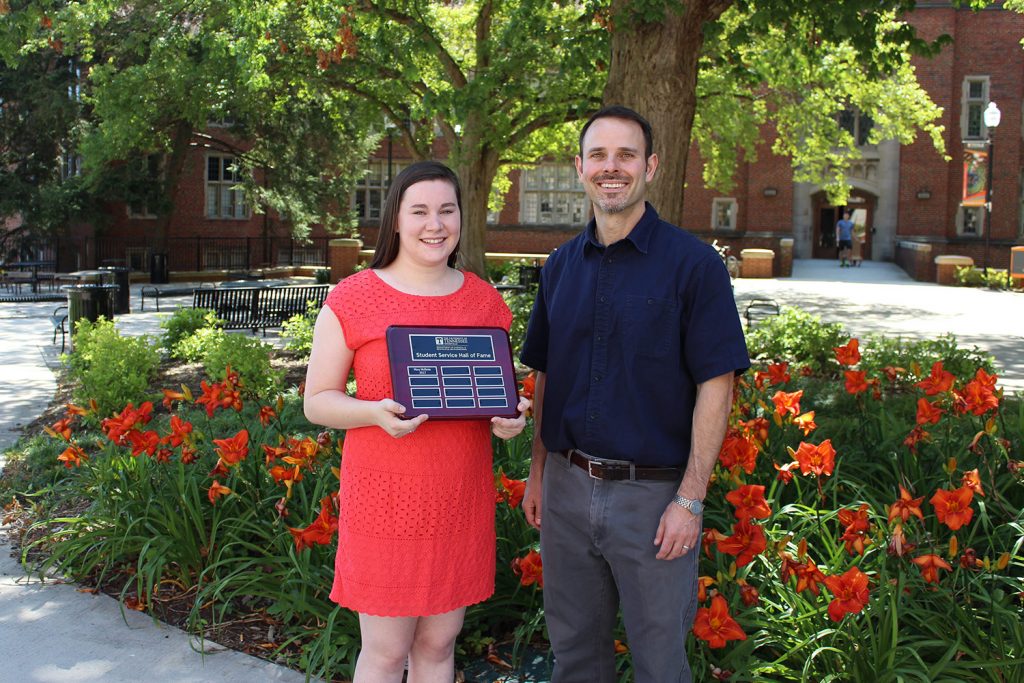 Mary McBride established a unique legacy with her graduation in spring 2017. She is the inaugural member of the department’s Student Service Hall of Fame.

“I now have the opportunity of hopefully inspiring current and future CBE students to give to the department and grow professionally,” she said.

The Student Service Hall of Fame highlights students who exemplify service to their community. McBride, now in her first year as a medical student at the UT Health Science Center College of Medicine in Memphis, certainly fits the bill.

While working on her chemical engineering degree with a concentration in biomolecular engineering, the Seymour, Tennessee, native also maintained a position as a Tickle College of Engineering student ambassador and took on a major leadership role as chair for the 2017 Southern Regional AIChE Conference.

“I loved working toward a successful conference to help my community in undergrad,” she said. “Planning such a large-scale event was new to me. The greatest challenge was time management. I was focused on doing well in classes my senior year, but also spending every extra moment in Dougherty working on the conference.”

“We invented the Student Service Hall of Fame because we did not feel that we had an award that was commensurate with the effort and impact that Mary made on our department through her work on the conference,” said Associate Professor Eric Boder and AIChE Student Chapter advisor. “We had a really great team of students working on our conference planning committee, but every team needs a dedicated and effective leader to function well. Mary worked tirelessly for roughly a year, with a constant smile on her face and positive attitude, making arrangements and planning every detail of the event.”

McBride had attended other regional and national AIChE conferences, but many other CBE students had not been able to go.

“Having the conference in Knoxville allowed for our students to get highly involved in the planning process,” McBride said. “It was most satisfying to see my peers get involved in AIChE in a more in-depth way than just our local student chapter.”

The conference gave UT engineering students the opportunity to network and present research to peers from other universities as well as representatives from industry and graduate schools. McBride looks back on the experience as a definite success.

“Undergraduate students from all over the southeast commented on how smooth events went and how much fun they had,” she said. “I think our successes in organization of Chem-E-Jeopardy, research presentations, tours of ORNL, and the Chem-E-Car competition originated from the care we took in planning each event. We wanted students to feel excited about being in Knoxville and at UT. This made for a great conference, but also numerous opportunities for graduate recruiting for the college.”

Part of the success could also be attributed to the inclusive sense of community that McBride helped foster, even before the conference got underway.

“In our program book, there was a letter welcoming the students to Knoxville and to UT,” she said. “I made it a point in the letter to let visiting students know that, here, they are a part of the Volunteer family.”

“The result was an event that showcased our department and our college to hundreds of students and faculty from many states,” Boder said. “Within three weeks of the conference, more than a dozen attendees had submitted formal inquiries regarding graduate studies at UT.”