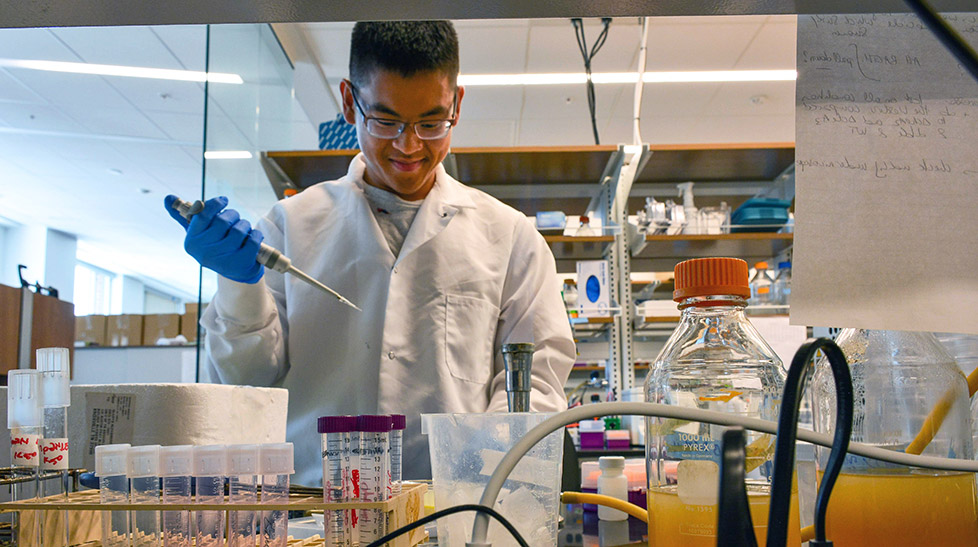 Lam Vo of Knoxville is a CBE senior and has been working for three years as an undergraduate researcher in Gladys Alexandre’s Lab in the Biochemistry, Cellular, and Molecular Biology (BCMB) department at UT. While Vo’s academic profile may sound like any other student’s, his path to research is no ordinary story.

Vo’s family immigrated to the United States from the town of Nha Trang in southern Vietnam in 2008.

Vo said, “I didn’t have any motivation to go to college…For most of my middle and high-school years, I was washing pedicure sinks and doing laundry in my parent’s local nail salon. My vision at the time was to work hard enough to support my family financially. So, going to college didn’t really cross my mind. Then, I got introduced to biology during high school, and my world changed.”

In his high school biology class, Vo watched a TED Talk by Bonnie Bassler, who talked about her research in microbiology and how she discovered how bacteria communicate with each other.

Inspired by Bassler, Vo aspired to do something more meaningful with his life. He applied to attend college at the University of Tennessee, Knoxville.

Like many undergraduates, Vo was not sure what he wanted to do with his Bachelor’s degree: “Being a chemical engineering major, I was pushed to follow a career path in industry. However, I wanted to see if a research career would be a better choice for me. I applied to a bunch of labs in the BCMB departments, and Dr. Alexandre hired me.”

As he continued to work in Alexandre’s lab, his love for biology skyrocketed.

Vo said, “I chased the feeling of being intellectually challenged…I decided that doing research in cell biology would be the only thing I will do in the future. Once you fall in love with doing something, it is really hard to steer away from that.”

His first research project involved probing how a bacteria called A. brasilense controls its motility parameters, such as swimming speeds and swimming reversal, through the regulation of the flagella motor by multiple chemotaxis response regulators. He said, “I created different mutants, gathered hundreds of tracking data on these mutants, and ensured quality of the data for downstream analysis.”

When asked about his biggest challenge as a new researcher, he said that having confidence was difficult, as well as questioning what he could really contribute to the project.

Eventually, I came to realize that my lack of confidence derived from me not having a ‘growth mindset’… and I learned to change my perspective.”

Vo’s “growth mindset” changed the trajectory of his research career, and thus, the results of the research project. Alexandre’s lab sent their findings to the Biophysical Journal, where it was “accepted with revisions.” The reviewers of the journal needed the lab to confirm their findings about flagella rotation with another experiment. However, the lab did not have access to the necessary computer program for tracking the cell’s rotation in the tethering videos. Vo was concerned that the paper would ultimately be rejected because of this, so, he decided to create a customized MATLAB code to assist with the analysis. 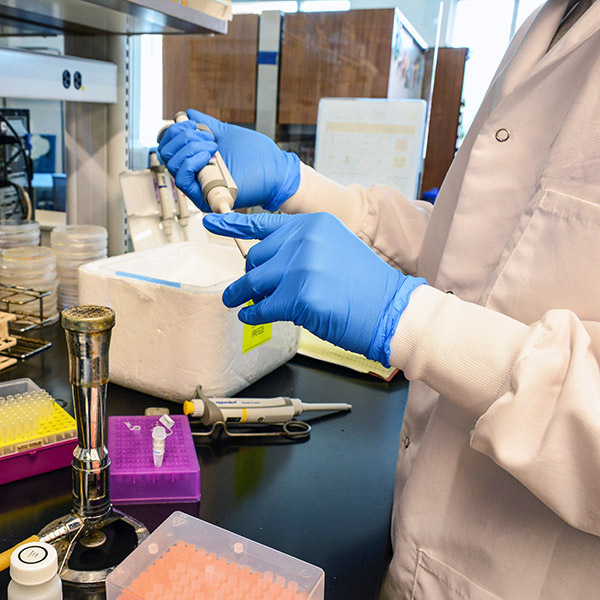 He commented, “It was quite a steep learning curve. I needed to learn how to process the video, extract information from binary images, and process the information to get the raw rotation data set.”

After some trial and error, Vo got the code to work and discovered that their original tracking analysis was accurate. After re-submitting the manuscript with the additional results, the paper got accepted.

By discovering how A. brasilense performs chemotaxis, the lab hopes to contribute to the development of this bacterium as a biotechnology to be used to address modern agricultural challenges.

When asked about what he has learned from this research experience, Vo commented on the necessity of mentorship: “Growing up, I didn’t have anyone who really believed in me and would take my hand throughout my journey. It was not until Dr. Alexandre took me under her mentorship that I bloomed: I felt like I had a place in science.”

He also emphasized the importance of persistence in science. He recalled a time when he was faced with multiple failed experiments, and a graduate student mentor told him that, “…persistence is key for success in science, and nothing worthwhile will be easy.” Vo says that message still sticks with him today and has become his internal memo whenever he faces challenges.

Vo hopes to take everything he has learned as an undergraduate at UT and pursue a PhD in quantitative biology/systems biology. He hopes to become a professor and run his own lab that focuses on bacterial cell biology research.

Looking back, I have changed a lot: from a kid who didn’t have motivation to go to college, to a young aspiring scientist. I am really excited about starting the next chapter of my research career in graduate school.”

Vo’s advice for students looking to get involved in research, is to not be afraid to email professors and ask about any available research positions. He said, “…professors love training undergraduate students, as long as you are willing to learn and work hard.”

Read the original story on the Office of Undergraduate Research’s website.