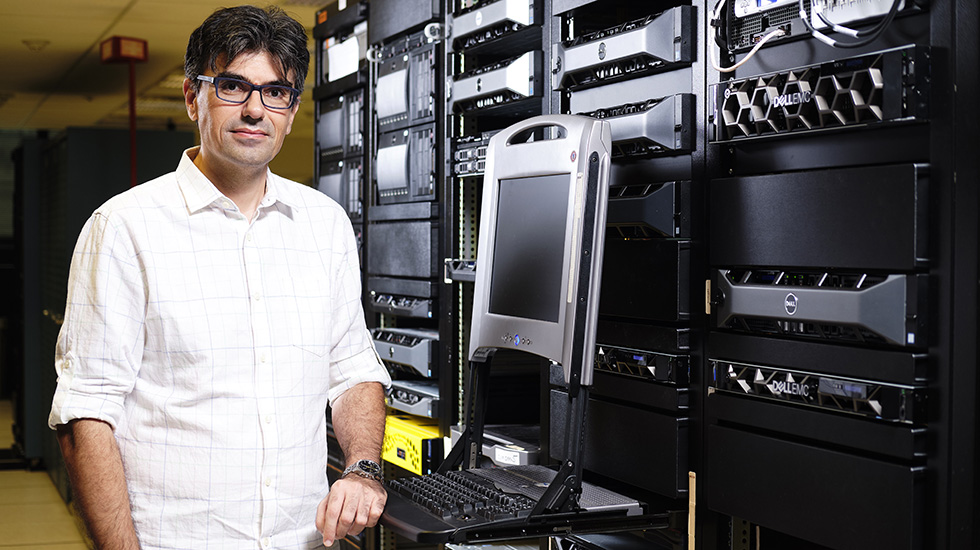 Computers have come incredibly far, incredibly fast. But when it comes to solving problems in the realm of chemical and biomolecular engineering, there’s a significant gap between where they are and where Associate Professor Manolis Doxastakis sees them heading over the next few decades. His research in multiscale computational modeling is building bridges between what exists and what’s possible.

“Computers are still very limited in being able to directly, automatically predict macroscopic properties of materials using a single technique and information such as their chemical composition,” Doxastakis explained.

That’s where multiscale modeling comes in. “It is like a tool box,” he said. “You can’t use one tool for all jobs. In the same way, there are very different computational techniques to address the behavior of material over different scales of time and length. We bring them together to start from atoms and reach all the way to observed macroscopic properties.”

The data derived from probing a material with one technique, at the smallest scale, becomes part of the input for another technique, which then examines the material at the next scale up.

Doxastakis calls this process “building bridges,” and through it, he and partnering research teams around the globe can build a much fuller understanding of the mechanisms that underlie specific material properties—the “why” beneath the “what” that can be observed in lab experiments. Through this modeling, researchers can interpret lab results, determine if surprise findings are due to noise in the data or if they’re worth follow-up research, and design new materials to achieve specific properties.

“If you don’t know why, it’s hard to make a new material,” Doxastakis said.

The big picture, though, isn’t creating a new material. It’s creating ever better models. “The ‘holy grail,’ what we would like to have, is predictive models. Computers that will be able to predict everything and design our materials without even needing to do the experiment,” he explained.

His current research includes modeling the design of new elastomers for the automotive industry and improved processes for patterning semiconductors. For the latter, he’s working to better understand how small molecules diffuse in the thin films of polymer used to create patterns. As computer chips get smaller and more powerful, semiconductor patterning requires virtually perfect lines.

There is the experimental approach of trial and error, or you can create models. We would like the computer to be able to predict what kind of compound we should use for patterns with much higher fidelity.”

As Doxastakis focuses on process over product, he is, in a sense, building a bridge between academia and industry. “Being able to have an eye on what industry does and have a view of what is interesting from industries’ perspective is very important,” he said.

Computational modeling research rarely receives industry backing—it seems too far removed from the point of application. Yet both Doxastakis’ elastomer and semiconductor research projects have industry support. The hope is that after he and his collaborators shepherd these projects to a level of maturity, industry researchers will take them the rest of the way to application.

As computational modeling matures, it also attracts more attention from students. Today’s digital natives have a much better grasp on how this method can impact lives and industries.

“The job market for people with computational modeling skills will only increase,” Doxastakis said. “We just need to get to the last stage—adoption of the modeling by the industries. Then employers will start asking for people with these skills.”

In the meantime, the research of Doxastakis and his colleagues as well as the international groups they work with, will continue to build bridges—between scales and computational techniques, between current capabilities and the potential to engineer anything from a new tire to a new medicine using predictive models.