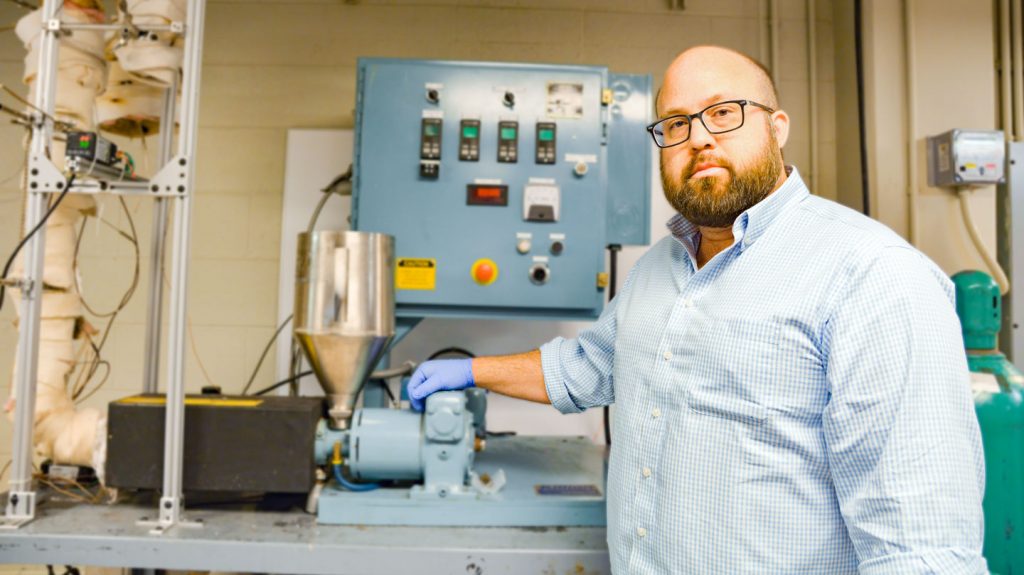 Laursen’s Work with Catalysts Could Have Profound Effects

Many of the things that shape and define our modern world owe their current performance, or in some instances their very existence, to catalysts. Similarly, a lack of inexpensive catalytic materials also inhibits many advanced and more environmentally clean technologies from being developed and deployed.

In simple terms, catalysts promote chemical reactions that would otherwise be impossible. Catalysts dramatically improve reaction times and energy efficiency of chemicals and fuels production and help to reduce harmful emissions. Everything from food to fuel, from plastics to medicine are impacted and improved through the use of catalysts. Catalysts are also used to clean up dangerous pollution that contaminates our air and waterways.

For over a century, catalysts have consisted of rare and expensive metals like platinum, palladium, and rhodium and are used to transform crude oil into all the staples of society. Although these catalysts are highly optimized and the backbone of the chemicals industry, they fail to meet the challenges presented by new ‘green’ and environmentally friendly chemicals and fuels production.

That’s a problem that CBE Associate Professor Siris Laursen is focused on solving.

“We design catalysts using a fundamental understanding of how they function at the atomic and molecular level,” Laursen said. “We have made great strides over the last decade in understanding how to turn something as cheap as dirt into a catalyst that performs better than platinum. Advanced understanding of the connection between solid-state electronic structure and surface chemistry is what has enabled our progress.”

Laursen and his research group have been actively developing large suites of catalysts composed of earth-abundant transition metals and elements from the p-block of the periodic table, such as combining nickel and gallium—an effort that is accelerating as he establishes new fundamental understanding.

These new catalytic materials have wide-ranging, long-lasting implications, according to Laursen, in the global effort to develop biofuels, cleanly produce H2, and even transform CO2, water, and air into valuable chemicals, fertilizer precursors, and fuels. Laursen is even developing catalysts to transform recalcitrant plastics wastes into oil, grease, and diesel fuel.

As the ability to produce new catalysts improves, wholly new forms of chemical industry and distributed chemical and fuels sources will be made possible. For example, fuel cells are just now being commercialized in automotive applications because new inexpensive catalytic materials have finally been developed after nearly seven decades of research.

Laursen is also developing new forms of energy delivery in catalysis that promise to dramatically improve overall efficiency and allow many difficult “green” chemical transformations to be achieved. For example, turning CH4, CO2, water, and N2 into valuable chemicals requires very large amounts of energy and current processes are either impossible or extremely inefficient.

New high-energy catalysis techniques are being developed by him as well.

“High efficiency does not inherently mean low energy,” said Laursen. “If we can intricately control highly concentrated energy packets that are contained in electronically excited crystals and use them to drive energetically demanding reactions, we can open a whole new world of possibilities. Understanding the chemical physics behind the use of non-equilibrium energy to drive catalytic reactions would be similar to achieving sustained nuclear fusion.”

These new “directed energy” approaches may be vital to solving the CH4 and CO2 pollution problem. Currently, CO2 is considered an environmental scourge, but with the right catalysts and control of high energy phenomena, CO2 could go from villain to valuable chemical resource. Ultimately, Laursen believes that a chemical economy that utilizes CO2, water, and N2 as its main feedstock is the future of humankind.

“There are catalysts designs that have shown that it is possible to convert carbon dioxide into complex hydrocarbons,” said Laursen. “However, it requires a lot of energy to make that happen, but with the right, highly efficient catalyst, those emissions can be turned back into fuel.”

Laursen also admits that, while it might sound simple, it is actually “incredibly complicated down at the atomic and electronic level,” but that significant progress has been made through his research over the last decade.

“Using abundant elements, as we are doing, makes the catalysts we design orders of magnitude less expensive and completely changes the game,” he said.

Thanks to Laursen, alternative inexpensive catalysts are already available, with more coming soon.