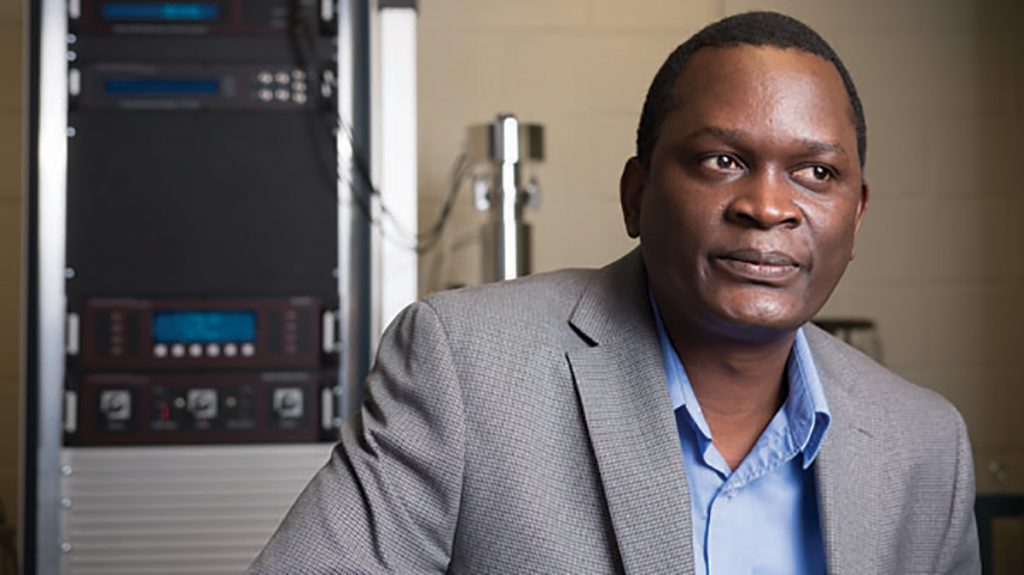 Remember a year or so ago when Samsung Galaxy smartphones kept exploding? They were recalled but the threat still exists… in every smart phone we use.

Well, actually, in a lot of things we use.

The source of the explosion was the failure of the lithium ion battery—the standard kind of battery used in many tech products.

“The batteries’ electrolytes have numerous carbonate additives,” explained Joshua Sangoro, assistant professor. “One of the major problems with those is that when mixed with lithium ion salts, spontaneous chemical reactions are known to occur at temperatures as low as 140 degrees Fahrenheit. These reactions release hydrofluoric gas which is highly toxic and can easily catch fire.”

In addition, after recharging the battery a couple of times, some root-like patterns called dendrites begin to grow from one electrode towards the counter-electrode of the battery. This leads to an electrical short-circuit characterized by sparks. Fueled by the accumulated hydrofluoric gas and other flammable electrolyte constituents, the sparks ultimately lead to explosion of the lithium ion battery.

There’s got to be a better, safer way to power our technology, and Sangoro’s work is getting us closer to that way.

“I would really like to make an impact in changing the type of electrolytes that we have—or be able to design new ones that aren’t as dangerous as the current ones we use,” he shared.

The answer lies in salt. Liquid salt, that is.

Also known as ionic liquids, these materials have low vapor pressure, are electrochemically stable, non-flammable, form a layer around electrodes to prevent the growth of dendrites, and remain liquid in a wide temperature window.

This all means there’s no danger of them spontaneously combusting.

What’s more, they consist of negatively and positively charged ions rendering them electrically conductive—a key requirement for rechargeable batteries. However, because ionic liquids consist of large molecules, the electrical conductivity is low compared to standard electrolytes. So, Sangoro is researching the impact different molecular structures have on ionic conductivity. All with the goal of designing a better, safer battery.

Sangoro and his team of students are doing this by leveraging the power of an experimental technique called broadband dielectric spectroscopy. This method, only being used by a handful of researchers in the country, enables them to alter the molecular structures by exposing the materials to electric fields through a wide range of timescales. Knowledge of timescales is crucial to understanding the physical properties of materials including how much electrical energy a material can store and conduct.

We apply a small electrical field to disturb the molecules and then monitor how the molecules get back to their equilibrium positions. The goal is to find ways of designing ionic liquids with higher ionic conductivity.”

Pinpointing optimal energy storage and conductivity in ionic liquids is almost akin to finding a needle in a haystack. Because they have a lot of positively and negatively charged ions, the liquids hold the possibility of creating trillions of new chemically distinct materials with different properties and uses. This makes them very promising for improving all types of technology but also very difficult to study.

“This vast number of chemical structures require scientific design criteria based on understanding of the correlation between structure, interactions, and desired properties,” explained Sangoro.

Sangoro’s team consists of postdoctoral, graduate and undergraduate students supported by grants from the National Science Foundation and US Department of Defense.

Sangoro says engaging with students inside the classroom and the lab is one of the most rewarding parts of his job.

“It’s amazing when you see the students understand the concepts when they arrive not knowing any of them,” he shared. “It is really gratifying.”

Also gratifying? Making our world a safer and better place to live.

“Science should be useful ultimately to society, and we should understand the basics of how everything works so that we can make steps forward.”

Sangoro is working on it.