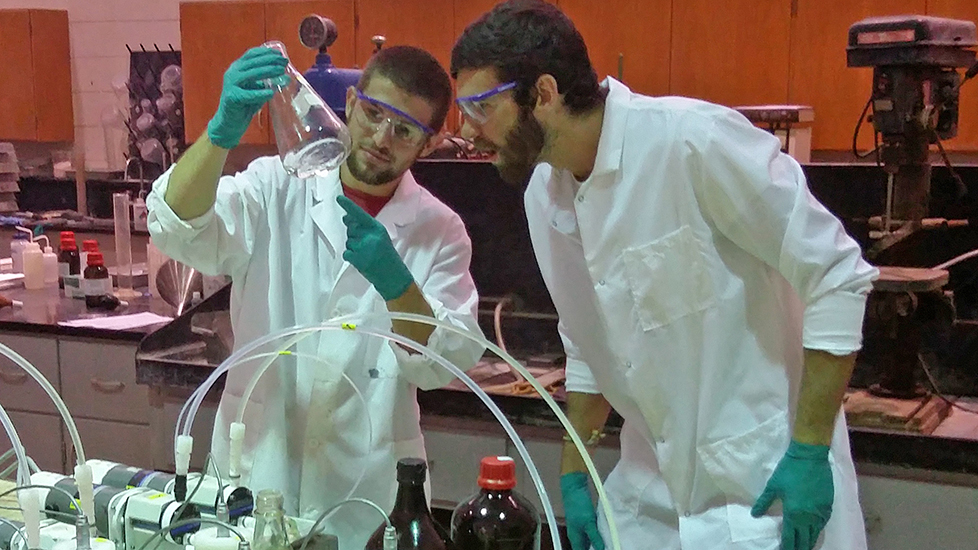 Students and faculty from CBE recently got a chance to put their knowledge to the test while improving the odds of finding a new source of rare earth elements (REE).

Doctoral student Dave DeSimone, and seniors Taylor Forrest and Nick Dement travelled to the Florida Industrial and Phosphate Research Institute (FIPR) to test a developmental process for rare earth recovery from an alternative source as part of a project led in part by CBE Professor Robert Counce and CBE adjunct professors Jack Watson and David DePaoli.

These tests were made possible by collaboration between UT, Oak Ridge National Laboratory (ORNL)—where DePaoli works—as well as the Idaho National Laboratory and FIPR through the Critical Materials Institute of the Department of Energy (DOE). The project holds vast importance for the US, as highlighted by the DOE.

“The Department of Energy found that four clean energy technologies—wind turbines, electric vehicles, photovoltaic cells and fluorescent lighting—use rare earth elements that are at risk of supply disruption in the next five years,” said Counce. “The objective of our work is to evaluate possible routes for recovery of rare earth elements from waste streams from phosphate processing.”

Prior to the Florida investigation four teams of senior students developed conceptual processes and ranked the potential for recovery of REE from various waste streams from the phosphate industry, briefing ORNL and FIPR weekly and producing reports of their design and analysis activities.

“Our interaction with UT students on this project has been valuable in two ways,” said DePaoli. “The students have gained a vital educational experience, one that benefited the project through their analyses in prioritizing the phosphate byproducts in terms of their potential as REE source materials.

“Also, their recent tests have yielded valuable practical information toward the viability of REE recovery options that would not be accessible through typical laboratory experimentation.”

Rare earth elements, in contrast to their name, are not all that rare. The problem, and the real reason they are so named, is that unlike typical minerals they are rarely found in pockets or seams and are instead dispersed in low levels of concentration.

That wide dispersal makes obtaining them a venture with difficult profitability, but their importance to modern living makes their availability a necessary one. In addition to the high-end devices, they also play key roles in such everyday items as magnets, rechargeable batteries, mobile devices, and superconductors.

DeSimone, who leads UT’s student team, described the basic concept behind the breakthrough, noting that the phosphate industry uses sulfuric acid as part of their processes. By introducing a stream of solvent along side the acid, rare earth elements can be separated from the acid and brought into use. Doing so could potentially introduce a new source of rare earth elements while avoiding the need for new mining.

“That is one of the big plusses of this approach,” said DeSimone. “Tapping into byproducts of other processes to harness critical resources has been a major focus.”