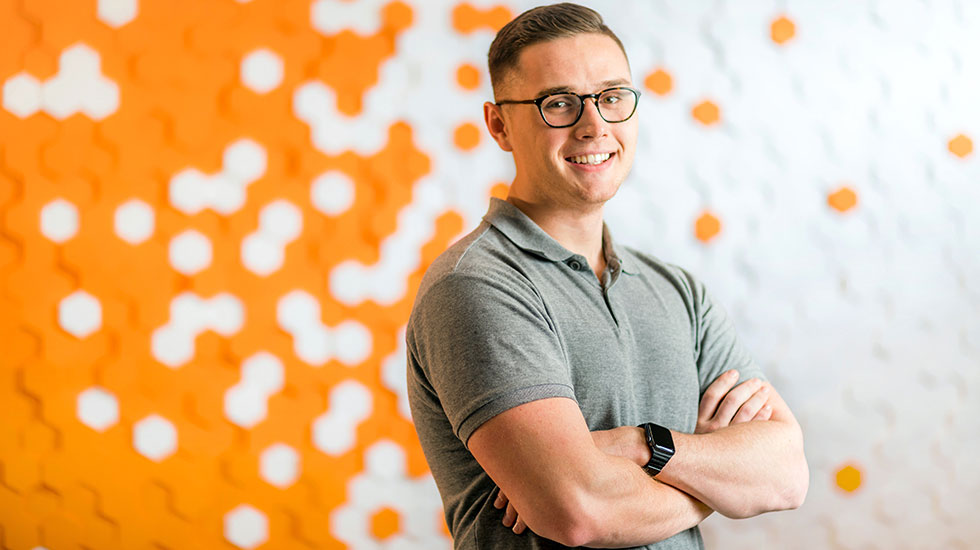 Grant Rigney (ChemE, ’19) already had a list of honors and rolls to his name when the fall 2018 semester was drawing to a close. Before it ended, he discovered his selection as a Rhodes Scholar—an incredibly humbling honor.

“I would not have been able to do this without a lot of help along the way, so I want to thank all of the faculty members, staff, students, and researchers I’ve been fortunate to work and study with,” Rigney said. “Knowing about the list of other Rhodes Scholars who have come before me is both daunting and inspiring, and I can’t wait to get started.”

While the list of previous winners from around the world includes notable names in politics, entertainment, and law, Rigney has his sights set on using chemical engineering to find better outcomes and reduce suffering during treatment for medical patients.

Specifically, he is exploring the use of phase transfer catalysts to measure how a patient’s body responds to procedures such as positron emission tomography (PET) and computerized tomography (CT) scans.

Getting a better picture of what such devices do to specific patients may allow for treatments to be tailored on a case-by-case basis, improving care.

That sense of empathy developed at an early age and has remained through his time as a student, leading him to get his nurse’s license in high school, shadow physicians, and develop a clear path toward his future.

Eventually, I’d like to be a surgeon, specifically in a facility or area that helps improve healthcare for vulnerable patients such as the elderly or in economically depressed areas. To get hands-on clinical experience, I went to night school while in high school to get licensed as an assistant nurse, which helped me get a job at an assisted living facility the summer between high school and my first year of college. It helped me see healthcare from a different perspective.”

Rigney said he took an interest in helping others after he and his mom formed a friendship with a less-than-fortunate man in his hometown of Normandy, Tennessee, an experience that showed him the disparities and challenges that some face.

More recently, he has honed his medical skills as an intern at Harvard Medical School and Massachusetts General Hospital.

Not bad for someone who was once fearful of hospitals and surgery.

“I was really scared of operating rooms, hospitals, all of that when I was growing up,” Rigney said. “I got an anatomy book as a gift, and that changed everything. It really opened my eyes to all the possibilities in medicine.”

His Rhodes experience began following graduation in May with all-expenses-paid studies at the University of Oxford in England, where he plans to obtain master’s degrees in both global health science and epidemiology and in evidence-based social intervention and policy evaluation.

Rigney was initially drawn to UT because of the Haslam Scholars program.

“It offered me opportunities I wasn’t likely to get elsewhere and gave me the chance to be part of a smaller group of motivated and driven people,” he said.

Rigney was also a Neyland Scholar, the editor in chief of Pursuit, UT’s journal of undergraduate research, president of the Student Alumni Associates, and a member of UT’s Alumni Board of Directors. He volunteered at Inskip Elementary School and the Fifth Avenue Clinic, and he co-founded UT’s Homeless Prevention University and Community Alliance.

He is also a licensed pilot, a triathlete, and an accomplished musician who plays the fiddle and mandolin, having played in his family’s bluegrass band at more than 400 concerts across the country and abroad.