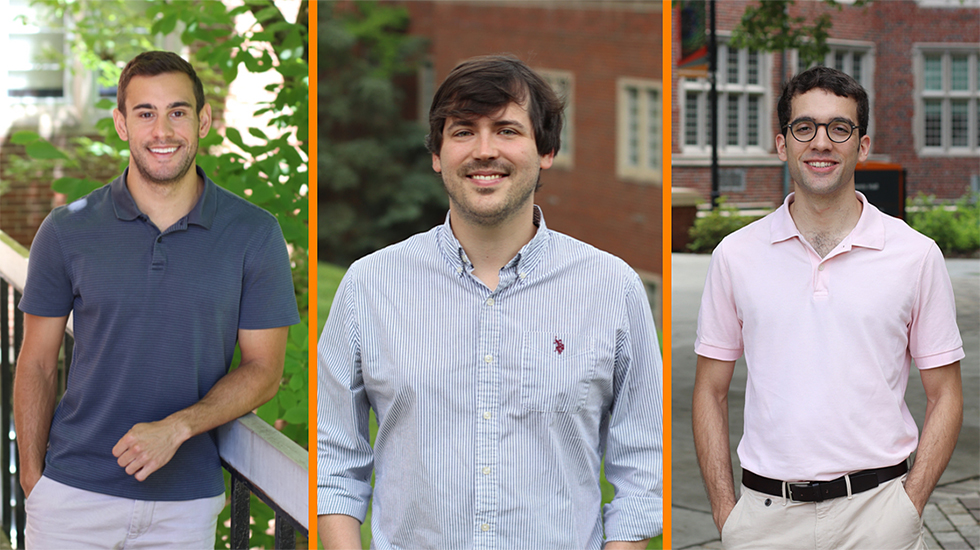 James (Jim) R. McKinley (BS/CHE ’77) and his wife Sändra are long-time supporters of both the department and college. Over the years, they have funded multiple endowments and scholarships, including the Jim and Sändra McKinley Scholarship Fund, which is reserved for CBE graduate students who show a high degree of effort and hard work in their studies. Thanks to the McKinley’s generosity, the department was able to recognize the efforts of three outstanding PhD candidates at CBE’s 2019 awards banquet.

Mendoza’s time at UT can be summed up with one word: change.

A doctoral student, Mendoza works with Cong Trinh, Ferguson Faculty Fellow in Chemical Engineering, and others on Trinh’s Virulent Pathogen Resistance ###UPDATE LINK### (ViPaRe) program, which seeks to identify and render infectious pathogens inactive through a system that combines biology, computing, and math.

Mendoza originally came to CBE in 2014 hoping to obtain a master’s degree and embark on a career in sustainability. He had been working in energy storage after completing two bachelor’s degrees in chemistry and classics from Stanford University in 2012, but realized he wanted to explore a different path.

“I wanted to dive into synthetic biology and metabolic engineering,” he said.

He anticipated his research would focus on biofuels, but for a number of reasons he joined Trinh’s ViPaRe team. He embraced his new healthcare-focused research. The lab uses CRISPR-Cas, a new genome manipulation technology, which he’s used to develop computational tools to streamline the manipulation of bacteria and yeast.

We’ve mainly been manipulating E.coli and Saccharomyces right now, and then we’re moving to the pathogens Candida albicans and Staphylococcus aureus, so MRSA basically, and trying to take the system and use it to create antivirals or antimicrobials.”

Mendoza enjoyed the research so much, he chose to stay at UT for a PhD to continue his work. All of these unexpected shifts could have derailed him, but he credits his classics education and the people he’s surrounded himself with for encouraging his innate intellectual flexibility.

“You don’t get anywhere long-term if you set your foot down and become recalcitrant,” he said.

Of being selected for the McKinley Scholarship, he said, “I was very excited. I had gotten the Exceptional Progress Award two years ago, so it was a nice validation that they still thought I was doing good work. I wasn’t slacking.”

PhD programs tend to have fewer defined goals and milestones, so it can often be difficult for students to be certain they’re making acceptable progress. For Jonathan Coote, receiving this award affirmed he is doing something right.

“Getting something like this definitely means a lot. It’s a nice indication that I’m on the right track, what I’m doing is working and keep doing it,” he added. “That is something that most graduate students need every now and then.”

He joined the department as a PhD student in 2016 after working for a stint as a chemical engineer in New Orleans, Louisiana. The modeling work and software being used by the company was new to many members of the team Coote had been assigned to, so it was a time of experimentation and discovery. The experience helped him realize his passion for finding solutions to specific problems.

“That was an indication that maybe research is something I should be going into,” he said.

He knew very little about polymers prior to coming to UT, so he credits Stein, Sangoro, and his fellow graduate students for teaching him everything he’s learned. Three years into the program, he feels he has found his calling. He plans to stay in academia, whether that’s in the form of a post-doc or a faculty position, once he’s completed his PhD.

He is extremely grateful for the McKinley’s generosity and the creation of the scholarship fund. To Jim and Sändra, he has one thing to say: “Thank you on behalf of all the recipients over the years. It’s a great thing.”

As one of two recipients of this award for 2019, Sergio Garcia admits he was pleased to be recognized by CBE.

“It is good to feel that someone pays attention to your work,” Garcia said. “I like to put effort and a lot of attention into the work I do, and a lot of times it is for my own satisfaction.”

Garcia has always been motivated internally and sets expectations for himself in just about whatever he does, including hobbies. He doesn’t know what drives him to do so, but accolades aren’t what’s pushing him to be diligent in his work with his advisor Cong Trinh.

“When it comes to the quality of what I’m doing, I’m not just trying to deliver what was asked, to only show to other people, but rather what I truly believe is important and what should be done. That is how I approach my work. Maybe this award is one of the ways that is paying off.”

Garcia also received the Extraordinary Professional Promise Award for 2019 at the recent Chancellor’s Honors Banquet. This honor is awarded to students who demonstrate professional promise in teaching, research, or other contributions.

The focus of his thesis is taking modular design principles seen in conventional engineering and applying them to understand and redesign biological systems.

Computers, automobiles, they have parts that are replaceable. That provides advantages when it comes to manufacturing efficiency, predictability, and so on. Modular design is ubiquitous in many fields of engineering, but it hasn’t arrived yet to biological systems.”

One of the technological applications of his research is in biocatalysis—converting available feedstocks like plant biomass into useful chemicals such as biofuels.

Garcia started his PhD in 2015. He said selecting UT for graduate school was an easy choice. He spent his junior year at UT thanks to the International Student Exchange Programs (ISEP) when he first worked for Trinh as an undergraduate research assistant.