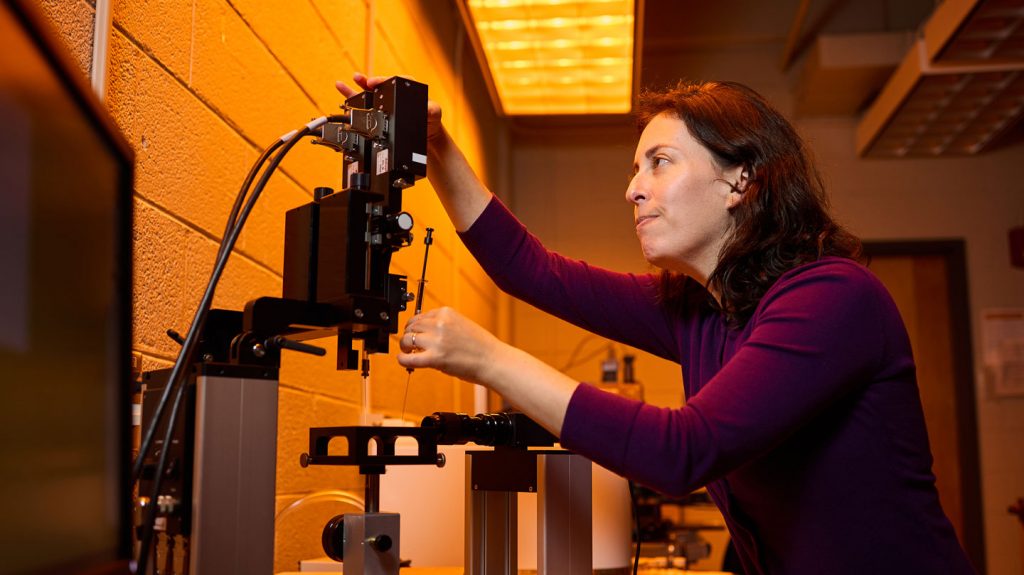 Water covers more than 70 percent of earth’s surface, and being able to move people and goods across it has long defined human history. One of the issues facing watercraft throughout time is marine fouling, where organisms attach themselves to any surface that comes in contact with the water.

Fouling can lead to reduced performance, delays due to repairs, and degraded infrastructure. Certain types of mussels, for example, can impact everything from engines to locks and dams.

While there are chemicals and treatments that can be applied to kill the fouling organisms, those compounds can also affect the environment around them in a negative way. The challenge is to develop prevention techniques or treatments that are fast and effective but don’t cause damage to nearby marine life.

There is now a promising new solution, thanks to research conducted by two CBE faculty members: Prados Professor Gila E. Stein, associate department head and director of graduate studies, and Joint Professor Michael Kilbey, who is also the Ziegler Professor in UT’s Department of Chemistry.

“The most effective coatings to date have included biocides, but those harm things beyond just the organisms causing the marine fouling,” said Stein. “We explored a number of different coatings and, while nothing was 100 percent effective, we found that combining different types of nonstick chemistries was the most effective against the widest variety of fouling organisms.”

The US Navy, as would be expected, deals with water fouling issues as a daily fact due to its vast numbers of watercraft and extensive water-based infrastructure.

How big is the water fouling problem for the Navy?

A 2011 study estimated that the cost of water-fouling remediation on its Arleigh Burke-class destroyers to be $56 million a year—the equivalent of more than $72 million today. At the time that class included 59 ships. It now has 70 with another 19 on the way, further driving up the price tag.

When you consider that those numbers represent just one of the 16 classes of ships that the Navy has, let alone all of its aquatic-based facilities, the price tag expands rapidly, highlighting the importance of research like the work being done by Stein and Kilbey.

“Water fouling has an impact on performance, of course, but it also has a high bearing on financial interests as well,” said Kilbey. “Even the Department of Defense has a budget it must adhere to, so being able to reduce costs in a massive way in one area means it has more flexibility in other areas.”

When their methodology was used in combination with the coatings they tested, removal of two specific algae spores was made easier—which also made resistance to water fouling more robust.

The result is a final design that is a win for the Navy and for the environment.